Daniel Tiger is a utopian vision of our post-industrial society.

Part of being a parent to a toddler is occasionally letting your child watch television. In our case we let our son watch Daniel Tiger a show that teaches valuable life lessons like how to handle anger and if you have to go potty stop, and go right away. Besides all those obvious lessons it’s teaching it also presents a post-industrial utopian techocratic society that our great grandchildren might live in.1

If you’re not familiar with the show the main tiger is Daniel Tiger, a 4 year old who also happens to be a tiger who lives in a bungalo with his mom and dad tiger. His best friends are O an Owl, Katirina a cat, Miss Elena a human, and Prince Wednesday also a human. The most obvious clue that we’re in a science fiction future is that sixty percent of the characters are walking, talking, opposable thumb having animals. 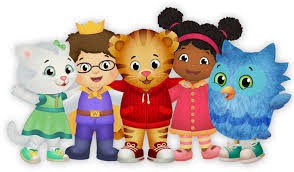 Uplifting, modifying animals so that they are smarter and more able to interact with human society is a fairly common trope in SciFi. What’s interesting here is that more than half the cast is an uplifted animals of some sort, and that the fact is rarely commented on. The only time it’s mentioned is an that they mentions 3 of the friends have tails, fur and feathers in an episode celebrating everybody’s differences. But in general the uplifts are treated just like any other kids. Fraans De Wall argues in “Are We Smart Enough to Know How Smart Animals Are?” that animals are much smarter than we give them credit for, but the amount of engineering to make tigers and cats bi-pedal along with the size increase required to make owls and housecats the same size as humans is still impressive.2

Besides the obviously advanced genetic engineering techniques they’ve apparently also have perfect self driving cars. The only mode of transportation portrayed on the show is a self driving, voice-controlled, ride-sharing trolley that’s used by everyone, both rich and poor. Nobody ever needs to wait for long and no one seems to have any qualms about sending their children to school on it. 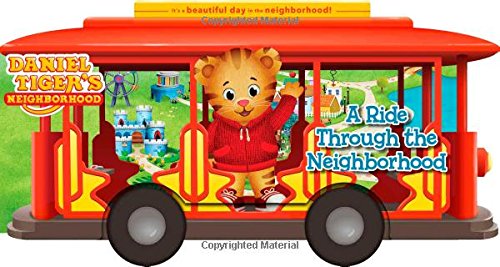 Safer than letting your child take an Uber

You would expect a much higher level of density would be required for a single ride sharing vehicle to be all the community needs but in Daniel Tiger they’ve also mastered urban planning. Most of the characters live in detached singe family homes but the Land of Make Believe isn’t just another cookie cutter suburbia. The characters live in a variety of housing including a bungalo (the Tigers), a McMansion (the royal family), a repurposed museum (Miss Elaina) and a multifamily building (Owls and Cats). And besides a thriving service industry on Main Street (a bakery, doctor’s office, music shop) the neighborhood has schoools, light industry, (the clock factory & crayon factory) plenty of public parks and a beach. All of this is in a single town is a clear win for mixed use zoning.

Besides their excellent land use policy they also must have a fairly progressive social safety net , either an Earned Income Tax Credit, or more likely a Universal Basic Income. This can be inferred from the class differences of the five children who attend private school3 together. At one end of the spectrum you have Prince Wednesday, whose father, King Friday is some sort of real estate mogul who owns most of the town. But the next richest family is Miss Elaina whose dad is a small business owner and mom works in a crayon factory. Then at the opposite end of the spectrum is Katerina KittyCat whose mom, Henrietta, appears not to work outside the home so have no income.4

The Earned Income Tax Credit is a subsidy that only applies for low income earners who work outside the home, so Katerina’s mom wouldn’t be eligible. Although it would likely help Daniel and O’s families.

A Universal Basic Income, essentially mailing a social security check to everyone, on the other hand would apply to everyone in the Land of Make Believe. Every resident including Henrietta and Katerina would receive a check. Since UBI is also much simpler to administer than EITC, you just have the mail man Mr. McFeely deliver the checks, it’s also easier to explain in a children’s show.

Daniel Tiger’s neighborhood is truly a utopia. It has technological advancement, good local governance and no class stratification. It’s a future I can hope my great grandchildren live in, won’t you ride along with me.5